Making connections between posts is the most important part of creating a virtual tour. That's where you spend most of the time when building it. This tutorial will show you how to do it in an effective way and how to save a lot of time using the backlinking feature.

To speed up the process of creating the tour, you can plan ahead already during the shoot. Adding links will be much easier, if all your panoramas are facing in the same direction. 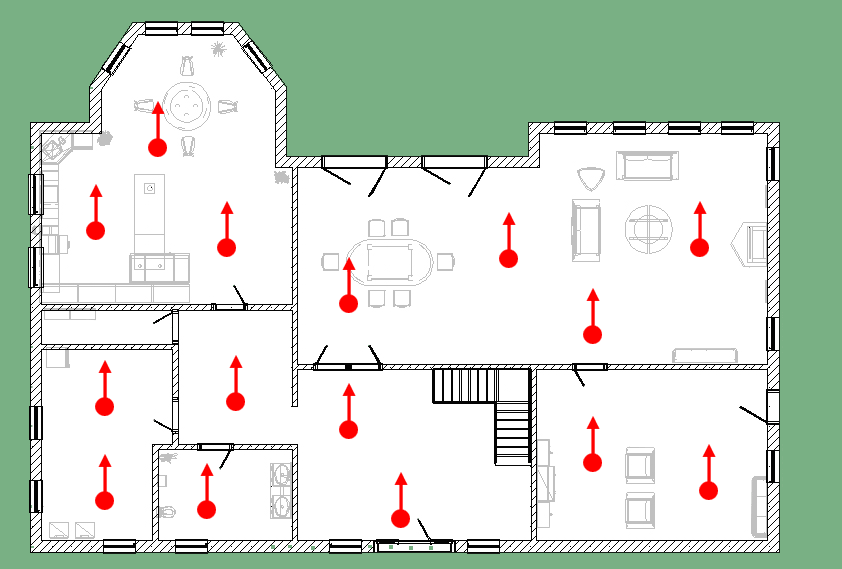 The red dots on the image above show spots where you shoot a panorama and the arrow show the direction it is facing. Make sure to NOT rotate the tripod when moving around.

The direction you choose doesn't matter, as long as it is consistent. A lot of 360 cameras look very similar on both sides, so you can use a small sticker to mark which side is the front.

However, if you already have photos and they are not facing the same direction or, for some reason, you can't shoot them that way - no problem, you can fix it later, while editing the tour.

After you upload all the photos for your tour and before you start adding the hotspots, you can take a few simple steps that will make building the tour much easier later on.

Give a good, short and descriptive name to each post. You can name the files before uploading them to Kuula. The name of the file is automatically used as description when the file is added to Kuula.

However, you can also change the name/description of each posts later, in the Kuula editor. Try to use names that are short but descriptive, such as: Kitchen, Master Bedroom, Garage entrance.

It's a very important step. Do not skip it!

If you made sure to shoot all the panoramas with the camera facing in the same direction, you won't have much work at this point, other than making sure the heading is indeed the same across all posts. Otherwise, you'll need to adjust the heading on each photo.

You don't need to be 100% precise, but the more consistent the headings are - the better. Look at the floor plan image above (in The shoot section) to get an idea of how the headings need to be setup.

Last thing before adding the connecting hotspots: adjust the tour settings. In most cases, especially for tours of physical spaces like apartments, offices or construction sites, we recommend to enable the Walkthrough Mode on the tour. This function automatically aligns all the photos based on the hotspot positions, creating an immersive walk through experience.

Next, for best visual effect, we recommend choosing either the Walk-in or Fly-in animated transition.

Go to the first photo in the tour and in the editor select the green hotspot button: 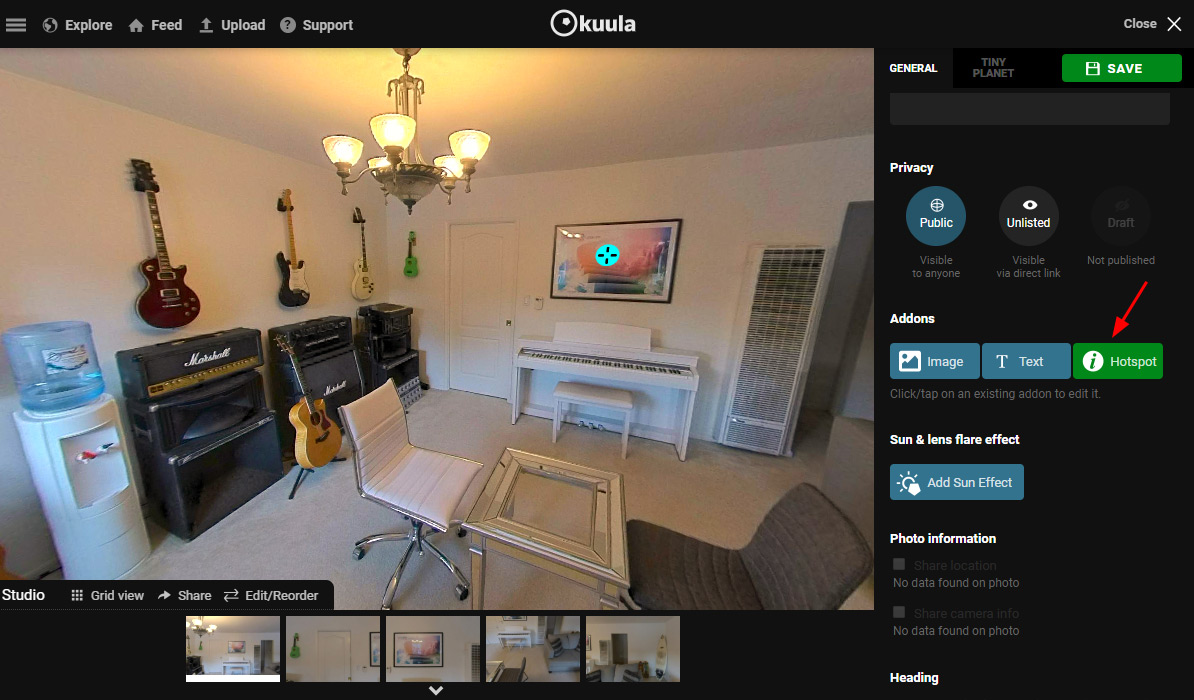 As soon as you click it, a hotspot will be placed in the panorama (1) and the editor will change to show the hotspot tools (2). At this point, you can change the icon, size, rotation and opacity of the hotspot. All the settings you make here, will be used on all the consecutive hotspots. 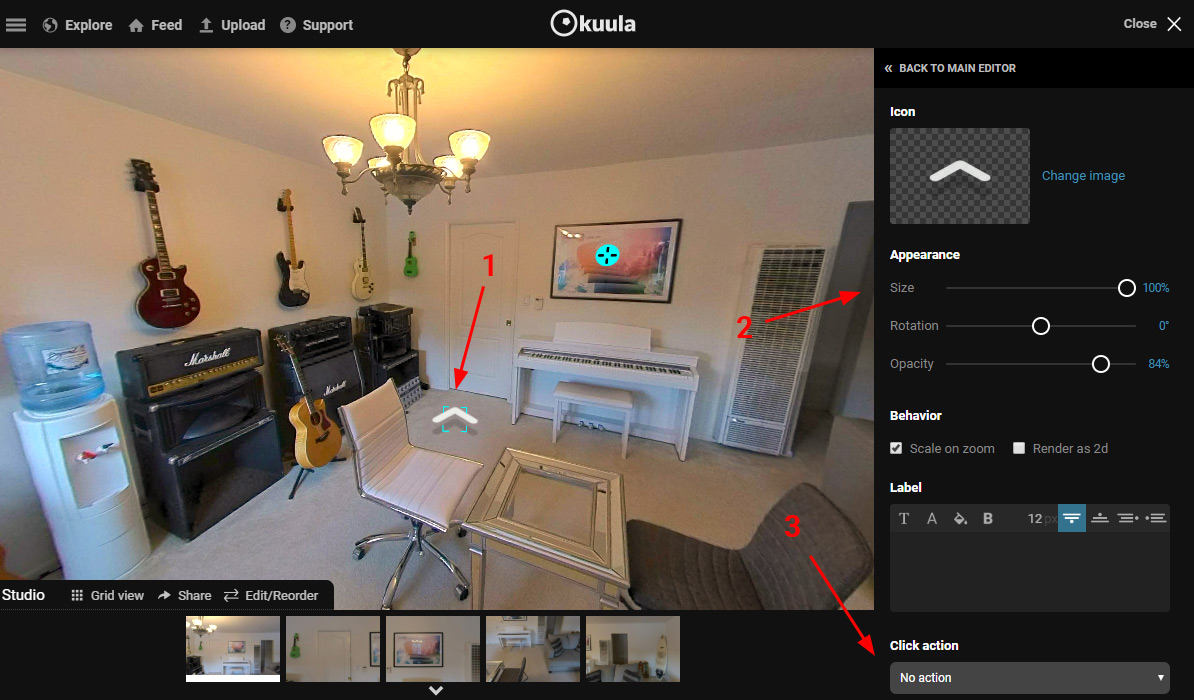 You can also add a label to your hotspot. Typically you may want to use a label that indicates where the hotspot goes. For example if it goes to the kitchen from the living room, you can add a label that says Kitchen.

When Kuula editor creates a backlink, it will replace the label with the name of the current post. A backlink placed in the kitchen panorama coming from the living room, will be automatically labeled Living Room.

If you do not add any labels to your hotspot, there will be no labels added to the backlinks either.

When you are done editing the hotspot, open the Click action dropdown (3) and select Go to another post. This will open a dialog, where you can choose the target post. The one you are currently editing is greyed out, other posts are active.

VERY IMPORTANT Before selecting the target post, make sure the checkbox at the bottom of the popup is selected and the label says Automatic backlink is ON. You only need to check this box once and all the hotspots added will use this feature until you check that box off again. After you make sure backlinks are on, click on the post you want to connect: 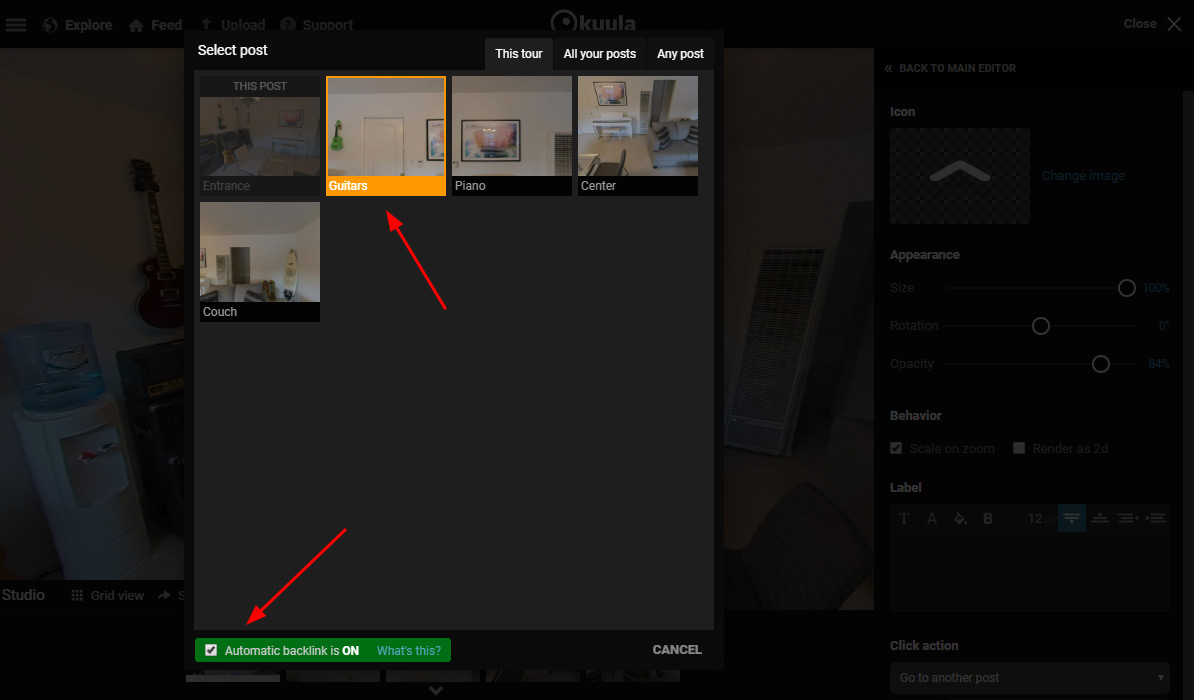 You will see a small green notification on the top of the screen (1) saying that a backlink was added to the other post. You will notice that a thumbnail and the name of the other post will appear below the action dropdown. The name will have a chain icon next to it (2): 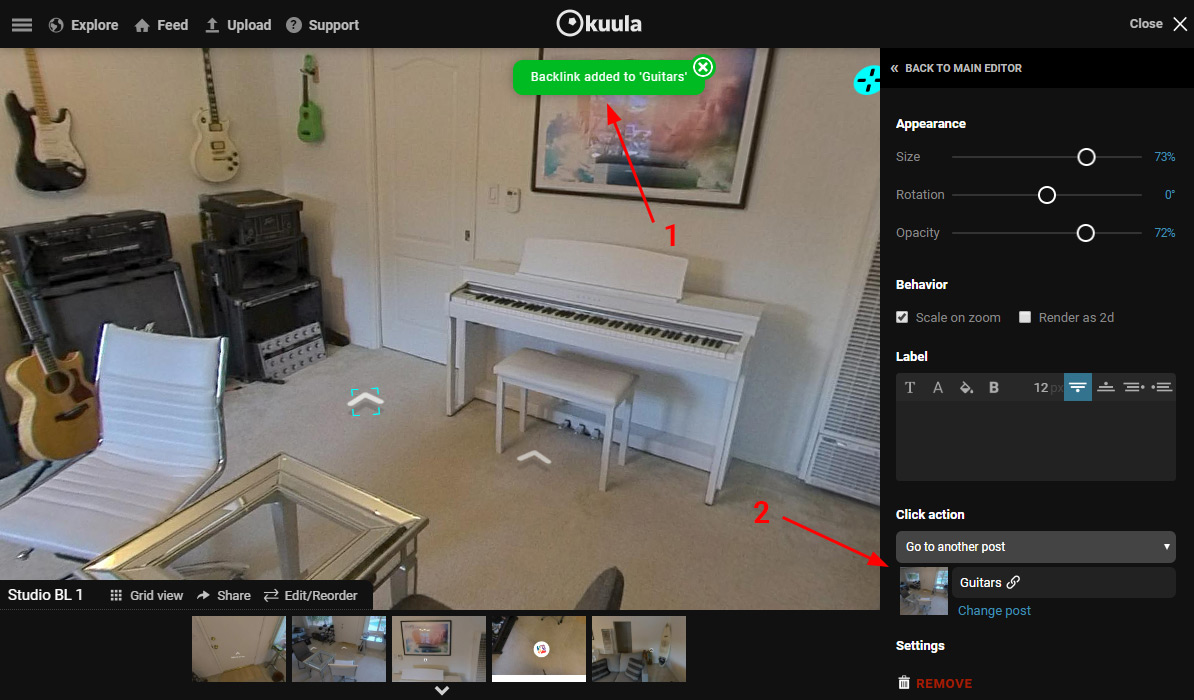 The chain icon means that the hotspot has a backlink. Linked hotspots obey some rules that regular hotspots do not:

You can now either continue editing the post, add more hotspots or other type of addons or you can hit SAVE and ✖ Close to exit the editor.

After exiting, you can check the backlink by moving between the connected photos. The backlinks are always placed on the opposite side, so after moving to a post - rotate it by 180° to find it. It should feel natural, especially if you enabled Walkthrough mode.

The Kuula editor tries to make sure the backlinks are put in the right place in the panorama, but despite our best efforts, some hotspots may require an adjustment of position. Most of the time, it will be just a little bit off, but sometimes you may need to move them more. This is why it's recommended to review the positions of all backlinks before sharing your tour!

You can move and adjust the position of linked hotspots independently of each other.

Backlinking has a relatively small learning curve and can make managing complex tours much easier. It's worth spending an hour or two getting used to this feature. Practice on a simple tour composed of 3 or 4 images and you will quickly get used to how it works. After that, you will never want to create a tour without it - guaranteed!