Virtual Reality (VR) works on mobile phones thanks to the data received from the gyroscope or accelerometer. This data provides information about the spatial orientation of the device and is used to track the head movement of the user. By combining a stereo fullscreen rendering of the panoramic image with the orientation data, Kuula creates the VR effect.

Apple iPhones, starting with iOS 13, require user to explicitely allow a website to access motion and orientation data. iOS also does not support fullscreen mode, but fortunately there are a few workarounds.

Enable motion senors in the iPhone

iOS 13, released in September 2019, introduces a new way to grant access to motion sensors. Under iOS 13, the website will ask you for access during the visit. 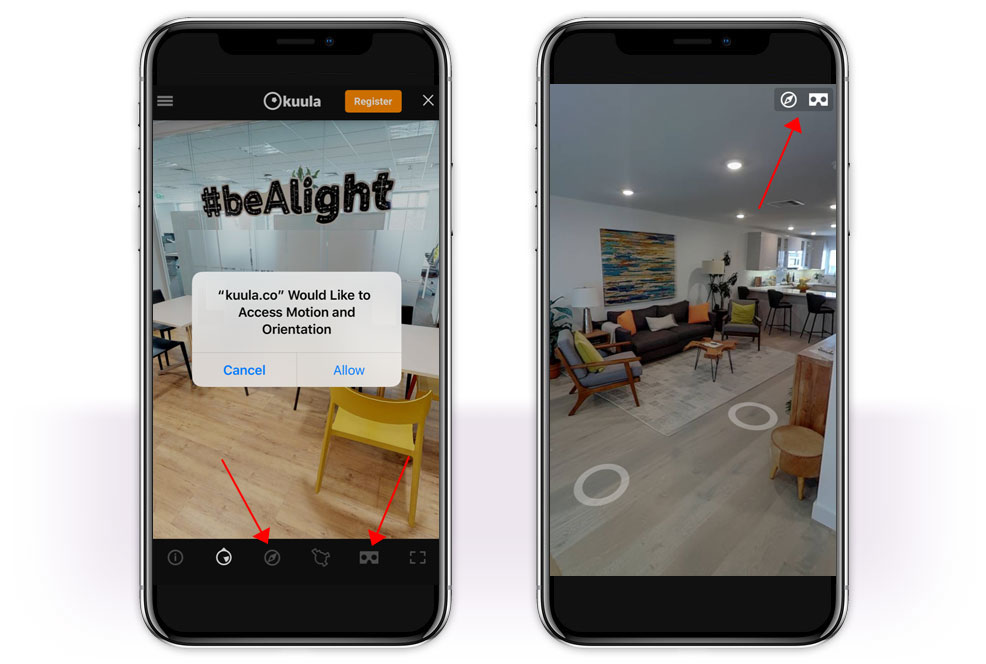 You can trigger that dialog by pressing the compass icon or entering VR mode, as show on the screenshot above. Similar icons will be present in direct lins & embedded players in the top right corner of the screen, as show above. When the system dialog shows up, you need to select Allow

If you accidentally tap Cancel or get a notification saying the the access was denied, go to Settings > Safari and select Clear History and Website Data. After that, open the page and try again.

In iOS 12.2 released on March 2019, Apple introduced an opt-in for Motion & Orientation Access. Before you can enjoy VR on your iPhone, you need to make sure this feature is activated. Fortunately, it's quick and simple!

You can do that by opening the Settings app and accessing the Safari panel from the list. Inside the Safari settings panel, enable the Motion & Orientation Access checkbox: 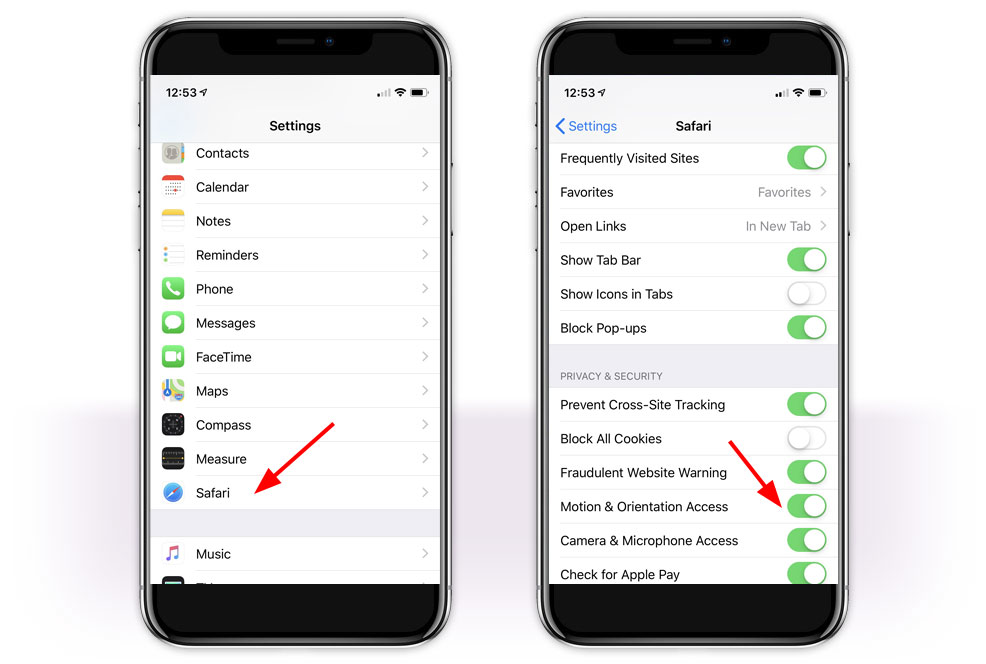 On version of iOS older than 12, there is no need for any special action to enable the gyroscope controls. It should just work by default.

Safari on the iPhone lacks another key function for a great VR experience: full screen mode. When browsing a tour in VR you do not want to have any system user interface, such as the top browser address bar. Kuula team implemented some workarounds to make that work, but sometimes you'll need to take an extra step.

After entering fullscreen or VR mode and rotating your device to landscape mode on an iPhone, the image may sometimes appear misplaced and unwanted UI elements may be present on screen. Here are a couple of tips on how to deal with those issues.

Rotate to portrait and back

A simple tip, but a powerful one! Safari is very sensitive and if you accidentally touch the screen in the wrong area, it will bring the user interface back. Whenever that happens, just rotate the phone to portrait and back to landscape. Typically this brings back the fullscreen VR experience.

Sometimes, open tabs will remain visible on the screen in landscape mode:

Safari will show the address bar in landscape mode - if there are mutiple tabs open. This effectively ruins the VR experience.

The best workaround is to simply close all the tabs and leave only the tab with the Kuula tour. After that, try to rotate your phone to portrait and back to landscape again and you should get a nice, fullscreen view without anything obstructing the VR experience!

Even though you will find browsers such as Chrome or Firefox on the Apple Appstore, they are not what they seem. Apple doesn't allow any browser other than Safari to be available for iOS, so all the other browsers are simply a version of the Safari engine with a branded user interface wrapped around it. Those browsers are typically a coorporate afterthought - experimental and buggy.

Kuula does not recommend using them and we do not provide support for those browsers. Please always choose the default Safari browser.